skip to main | skip to sidebar

The Demise of Reference Man 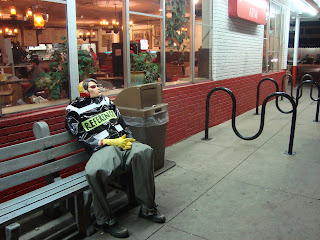 Reference Man has grown sad and lonely, trying to hunt down or grow his own food amidst an increasingly homogonized and standardized super-complex food system in the USA. He wants to do all this work while suffering from the radiation exposure of all the nuclear industries in North America.

He was created as a 20-30 year old middle-weight caucasian male in 1974. He will always be 20-30 years old, but the other people have grown older as the earth kept spinning 'round the sun 36 more times in the past 36 years.

A new generation of scientists and engineers and other workers came on the scene, following suit with those who came to the jobs before the new generation. First it was a question, then it was a mission: "can we make an atom bomb?" became "we WILL make many nuclear bombs!" The mission of Los Alamos National Laboratory (LANL) continues unabated 65 years after the first three bombs were detonated in the summer of 1945. The question was questionable, and the mission is unquestionably immoral, then illegal, and if people survive the 21st century, it will have been clearly evil to continue carrying on the mission of LANL. All humanity is threatened by the production of nuclear weapons pits at Los Alamos, he knew that his whole family was in trouble, that the whole world was in trouble. He knew that his purpose was obscure to begin with, and his purpose was negated by the fact that those who needed him were not stopping their co-workers from killing him. 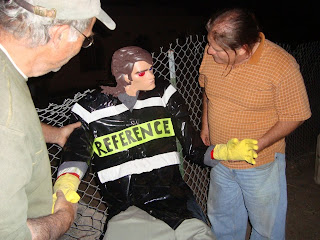 In the middle of the night during the 65th year of the nuclear age when Reference Man was feeling the last chance to abolish nuclear weapons and influence all humans to expose and debunk the ideology of nuclearism, random citizens DID begin to notice that Reference Man was in trouble. A few checked in with him to take his pulse and take him to the doctor.


After waiting all night at the emergency room, they let him go back to his home--the streets! 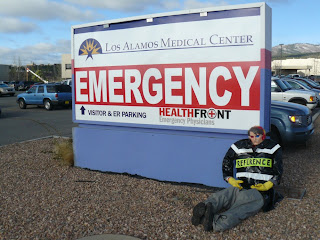 Reference Man was going nowhere fast. He tried to tell the folks in control of the nuclear nations to put some teeth into the Nuclear Non-Proliferation Treaty, because the five-year review was coming up in New York, USA.

He met a man who took him into a restaurant for his last lonely supper.

The food was not of Reference Man's typical diet in his regular customary culture of North America or Western Europe, so it further harmed Reference Man's ability to cope with radiation exposure. 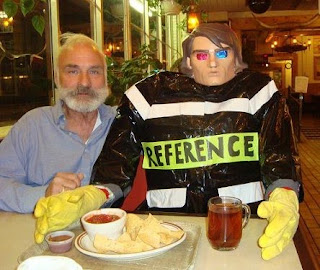 Finally. The folks at LANL's CMR simply made another plutonium pit for Reference Man to chew on. That was the end.
Posted by Reference Man at 00:37


The International Commission on Radiological Protection defined Reference Man as... “between 20-30 years of age, weighing 70 kg, is 170 cm in height...a Caucasian and is a Western European or North American in habitat and custom.” He was created in order to place all radiological data in his context to give a fair picture of the hazards of nuclear science. Reference Man has been the only model used in the majority of studies. Reference Woman and Reference Child have subsequently been developed as well, but are largely ignored. It's time for Reference Child and Reference Woman to step forward and do their jobs.

You can help. Follow your conscience as formed by the precepts of Buddhism, Judaism, Islam, Hinduism, Paganism or Christianity and you'll know that people have no rights to kill other people, nor to damage the Earth's environment.
Posted by Reference Man at 00:07

About The Reference Family

Reference Man
The International Commission on Radiological Protection defined Reference Man as... “between 20-30 years of age, weighing 70 kg, is 170 cm in height...a Caucasian and is a Western European or North American in habitat and custom.” Reference Woman and Reference Child have subsequently been developed as well, but are largely ignored.